Today in honor of Dr. Martin Luther King Junior’s legacy, join us in this virtual celebration with the family art activity, film list suited for adults, and a collection highlight on this page. 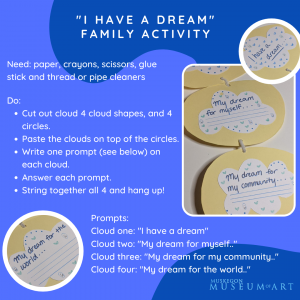 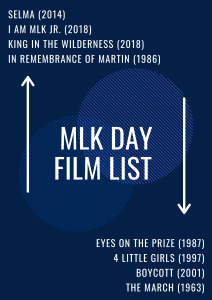 Felrath Hines was an African American artist who became an important painting conservator, working with some of the top museums in Washington, D.C. His art was his first passion however, and he made both cubist and abstract paintings over his long career.

Felrath was born in Indianapolis, Indiana and studied art at the John Herron Art School and then at the Art Institute of Chicago. He moved to New York City in the 1960s. Like many black artists, he found opportunities to sell and exhibit his paintings were very limited. The top museums and galleries in the city largely ignored or deliberately excluded artists of color. In 1963, Felrath joined his friend and fellow artist Romare Bearden in forming the Spiral Group. The group included Charles Alston, Emma Amos, Romare Bearden, Calvin Douglass, Perry Ferguson, Reginald Gammon, Felrath Hines, Alvin Hollingsworth, Norman Lewis, Earl Miller, William Majors, Richard Mayhew, Merton D. Simpson, Hale Woodruff and James Yeargans. These artists met to talk about how their art might speak to issues of social and political justice raised by the growing Civil Rights Movement. They also debated if the look of their art was, or should, be tied to their racial identity. Was there a “Black” way of making art? These artists, now all collected by museums around the world, had their only group show in 1965, but established ideas that changed how the art world saw black artists.

Felrath did not believe there was a subject or style exclusive to black artists and experimented with a variety of ideas in his art. The Muskegon Museum of Art owns several of his paintings that show how he changed over the years. The painting Two Heads was made in 1947 and is very Cubist. Cubism was invented by Pablo Picasso and Georges Braque as a way to show more than one point of view at a time in an artwork. It is most known for its geometric shapes, as if looking at a prism. As Felrath got older, his style changed. Abstract, from 1959, no longer has figures we recognize, but does have the same geometric shapes and busy, colorful layers of objects. In 1991, he painted Windsound. Windsound is very simple compared to the earlier paintings – the shapes have been simplified and made into big fields of color. But the ideas remain the same, how color and shape speak to each other on the canvas.

Felrath began cleaning and repairing paintings in 1964 and worked with the Museum of Modern Art, the Whitney Museum, and the Corcoran Gallery of Art. Felrath also worked with Georgia O’Keefe and they became good friends. In 1974, he left New York to work as the Chief Conservator at the Smithsonian’s National Portrait Gallery. He retired from the Hirshhorn Museum in 1984.

Our paintings were a gift from his widow, Dorothy Fisher, in 2009. Detroit artist Charles McGee, who is also represented in our collection, recommended the MMA to Ms. Fisher “because of [Muskegon’s] interest in collecting the work of African Americans and [our] community-oriented collections.” 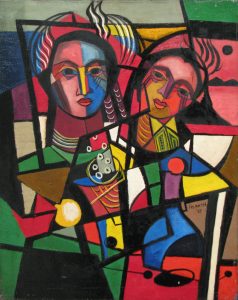 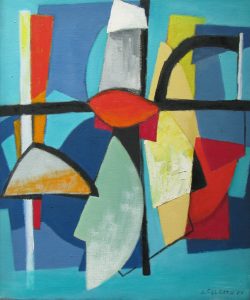 Abstract
Oil on canvas, 1959
Gift of the Felrath Hines Estate 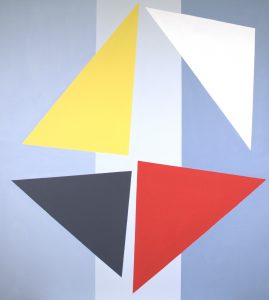 Windsound
Oil on linen, 1991
Gift of the Felrath Hines Estate in honor of the 100th Anniversary of the Muskegon Museum of Art
2009.16

Click on the icons below to find inspiration on our social media pages on MLK Day, January 18!