Exhibitions from the Archive 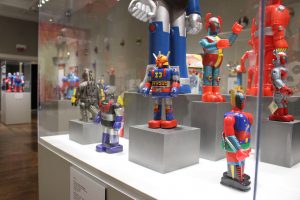 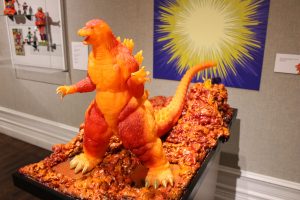 Our exhibition ideas and contents often come from personal connections and unusual but irresistible opportunities. And it never hurts to keep things a little weird and surprising for our guests. Our Senior Curator at the time, E. Jane Connell, met Warren Schwartz, a renowned Boston-based architect, while his firm was overseeing the construction of the Shaw Center for the Arts at Louisiana State University. Schwartz, it turned out, is one of the major collectors of toy robots in the U.S. Many toys from his collection are rare examples and often include their original packaging. His particular passion is the robot and action figure toys that originated in Japan during their golden age of popularity from 1972 to 1982. It was during this period that some of the most popular Japanese pop-culture characters were created including Red Baron, Jumbo Machinder, Ultraman, Mazinger Z, and the Transformers. Legions of Japanese toys modeled after these characters can be regarded as some of the most unique and imaginative playthings ever created for children worldwide. Architecturally inspired and rooted in centuries of Japanese history and culture, the characters are shiny and colorful and possess story lines developed for Japanese TV shows and movies. The robots, both fearsome and playful, are festooned with spikes and swords, spring-powered missiles, and “rocket punches.” 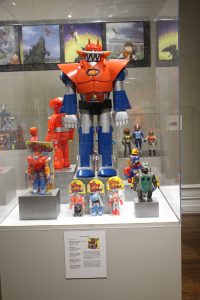 We opened Japanese Warriors: Robots from the Warren Schwartz Collection in 2014, filling the gallery not only with wildly designed robots, action figures, and masks,  but also with custom designed graphics and display materials. Every staff member involved had a blast putting this show together. Jane spent hours combing through Warren’s collection, trying to balance the excitement that came with every new piece with needing to tell a cohesive story in the gallery. Once everything was selected, she helped Warren pack the toys for transport with materials we had shipped in advance of her visit. Our exhibition design team built platforms to simulate retro space stations, a volcanic wasteland of spray foam and fake flames moved by computer cooling fans, flashing LED star fields, a moon scape, and a case to house a TV showing clips from popular Japanese TV shows. A designer we brought on board to create some of the graphic elements went on to design several of our catalogues and graphic materials published for subsequent shows. The biggest challenge was not playing with everything once the show was in place.

Program support was provided by Celebration Cinema/Cinema Carousel and the Michigan Council for Arts and Cultural Affairs with the National Endowment for the Arts.