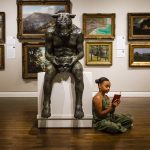 Beth Carter (British, born 1968)
Minotaur Reading
Bronze with gilded lead book, 2019
Purchase, through the gifts of the L.C. and Margaret
Walker Fund and others, by exchange
2019.20 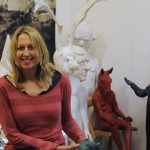 Beth Carter is based in Bristol, the United Kingdom, with representation in the U.K., New York City, Boston, and Paris. Her art is found in private collections around the world and in the permanent collection of the Musée d’Art Classique de Mougins, France. Carter received a BA in Fine Art from Sunderland University, UK with prior study at the Cyprus College of Art, the Academy of Fine Art, Sofia, Bulgaria, and the Art Foundation, Bath College of Further Education, UK. She has exhibited her work extensively in Europe and the U.S. and in art fairs in Paris, Hong Kong, and Melbourne, U.K.

Carter’s art, comprised of drawings and sculpture, is inspired by mythology and magic, of the mysteries of dreams and the subconscious and the ways we communicate and interpret the strange visions they give us. Her most common motif is of animal men, hybrids that promise both delightful play and quiet menace. As noted by writer Bonny Brooks on Carter’s website, “…a fox-man and a young girl hold hands while she steps away: are they dancing, or is he pulling her into the shadows of the woods beyond? So much of this imagery parodies the strange precariousness of a time when we were small – when we wanted to play but we could not be sure of our own perceptions and didn’t know who to trust.” The Minotaur especially is a traditional symbol of power and lust, a hyper masculine, dominating figure. In Carter’s sculptures however, his presence is softened, even vulnerable, and the lines between hero and villain become blurred. https://bethcarter.co.uk/

Minotaur Reading depicts the titular figure seated reading a gilt book. The textures of his skin and the masses of the muscle beneath are precisely yet expressively rendered in bold gestural marks. While he sits still and quiet there is a clearly present sense of his power, massive strength, and potential for violence. The sculpture is inspired by the artist’s father, one of six children, who did not learn to read until his early teens. Once he learned, he often immersed himself in books as an escape from his hectic family life. As a young girl, Carter saw her father as a massive presence, so the Minotaur serves to examine his inherent frailties and vulnerabilities as she looks at him through adult eyes.