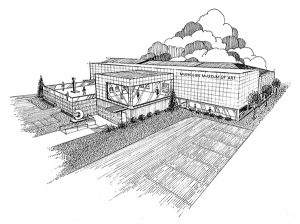 Two factors are driving the Muskegon Museum of Art (MMA) expansion initiative:
1. There is not sufficient space to display the permanent collection.
2. Touring exhibitions today require larger venues than the MMA has to offer.

The plan is to add three new galleries and two new classroom activity areas, along with support space to meet these challenges and sustain this cultural treasure for generations to come.

The MMA Foundation Board of Trustees Chair Frank Bednarek comments, “The Trustees are committed to keeping the Museum alive, well, and relevant for the next 100 years. To do this, we need to expand, grow, and improve the physical plant.”

Help shape the future! We have raised about $8.8 million to date, with a goal to raise $9.9 million to complete the expansion project. The MMA extends the invitation to the public to contribute to the project on the final leg of fundraising at the CAMPAIGN DONATION PAGE or by calling the MMA at (231) 720-2571.