Exhibitions from the Archive

While our doors are temporarily closed to the public until further notice due to COVID-19, MMA staff continue to work behind the scenes, planning for the future and finding new ways to engage with our audiences until we can again welcome you into the galleries. This series of posts offers a look back at staff-favorite exhibitions and gives some insight into the hows and whys of what we do. The MMA  staff selected these shows for how they have helped shape the Muskegon Museum of Art of today and serve as templates for our exciting future. It’s critical to note that none of these shows would have been possible without our generous sponsors and volunteers and our highly engaged museum community. Ultimately we exist to serve you: to educate, entertain, inform, inspire, surprise, and occasionally challenge.

Expressions of Faith was the first major show I mounted in my role as Senior Curator and its contents and design represented many of the elements the exhibition team and I had been working to incorporate into our shows. The show is also a favorite because it was only made possible through the individual skill sets and contributions of our entire staff. 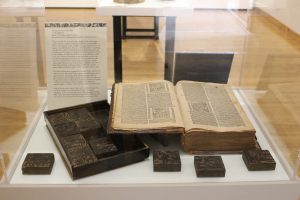 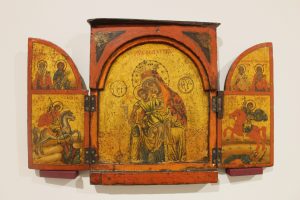 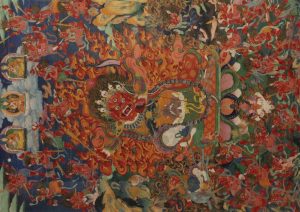 The Muskegon Museum of Art holds a significant collection of 15th- to 17th-century prints by Albrecht Dürer, Hans Holbein, Martin Schongauer, Lucas Cranach the Elder, Rembrandt, and other early printmakers. This print collection was made possible through the L.C. and Margaret Walker Foundation and is a defining facet of the MMA. We also hold a small group of manuscript pages, primarily from Europe, that illustrate the early art of book making and illumination. The original plan, inspired by a staff brainstorm, was to put together a showing of the prints titled Renaissance Ink, a reference to the use of ink in printmaking and a recognition that much of this early imagery still remained highly desirable in contemporary popular culture, including in tattoos. Renaissance Ink did not go forward as planned, transformed by an inspired request by our Executive Director Kirk Hallman who, at the time, was the Director of Development. Bike riding past Muskegon’s annual Unity Festival, Kirk wondered what we could do to tap into that audience. Another brainstorming session and an inventory of our resources and Expressions of Faith was born. 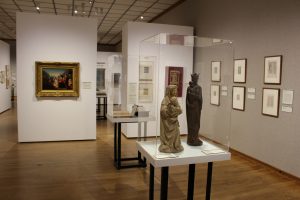 There were several immediate challenges, both conceptual and physical. The first was arriving at a thesis, a story line that would carry through the show and offer a new perspective on the work. I also needed a show that looked at multiple faiths and fortunately our collection reflected more than just Christianity. To pull everything together, I chose to examine how the images made by these artists shaped how faith was perceived and practiced. As people were reading the first printed Bibles, they were seeing the illustrations and internalizing how the artist was rendering Christ, Adam and Eve, the Holy Family, and other significant figures from scripture. To flesh out our understanding of early bookmaking, E. Jane Connell, our outgoing Senior Curator (and consummate researcher) dove into our manuscript collection, consulting with experts to learn more about our holdings and even getting translations of the texts. With a story in mind and a much bigger gallery to fill, we now needed more art. We reached out to the Van Kampen Foundation (Kimberly Van Kampen is one of our Board Members) to explore the possibility of borrowing from their extensive Scriptorium collection of early printed manuscripts and were thrilled when they agreed. At Center Gallery of Calvin College we discovered the Larry and Mary Gerbens Prodigal Son art collection. Director Joel Zwart was happy to loan a selection of images that revealed artist interpretations of the subject over several centuries. 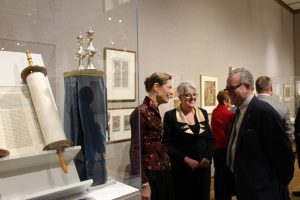 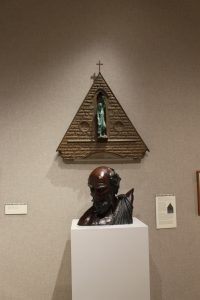 From St. Paul’s Church, our immediate neighbor, we borrowed maquettes for the sculpture of St. Paul by area artist Dr. Richard Kislov that graces their façade. Rick Jenkins at the Holland Museum opened their extensive archives of family Bibles to us and we found several wonderful copies that tied directly to pieces in the Van Kampen Collection and to our own Hans Holbein print. Holland also lent us several pieces from their amazing collection of church models rendered in glass and lead. Rounding out the Holland area loans was a beautiful Dutch interior by Emmanuel de Witte from the collection of James Brooks. Finally, with the assistance of Rabbi Alpert and the Board of temple B’Nai Israel, came one of their Torahs, a rare and wonderful opportunity to share the importance of the written word to religious practice. 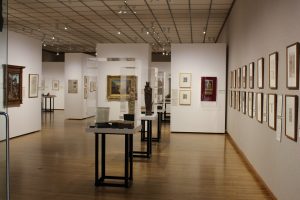 The final show, opened in December of 2016, featured imagery from Christianity, Islam, Judaism, Hinduism, and African and Japanese spiritual traditions. Sections of the show looked at architecture, early book printing, manuscript traditions, and the collaborations between early publishers, printers, and artists. We also featured numerous design elements that showcased the talents of the staff and gave the entire show a highly polished feel. Our collections manager Brent Williams created custom display mounts for the various books and Bibles and preparator Lee Brown oversaw the creation of new pedestals with open, airy bases based on early prototypes by retired preparator Keith Downie. Marguerite Curran, our Marketing Director and designer, put together a gorgeous series of large text panels, an unusual element for our exhibitions, which typically have only a single panel at the start of the space. Taken as a whole, the show was an aesthetic leap forward for the team, and subsequent shows, especially our major blockbuster showing of Edward Curtis’s The North American Indian, drew from this experience. 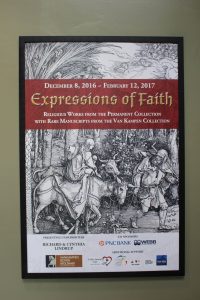 The presenting sponsors for Expressions of Faith were Richard and Cynthia Lindrup and the Van Kampen Boyer Molinari Foundation. Additional support was provided by PNC Bank, Webb Chemical Service Corporation, Blue Lake Public Radio, Faith Animal Care PLLC, and the Michigan Council for Arts and Cultural Affairs with the National Endowment for the Arts.